Home after 10 months in hospital | News

Hospital staff lined the corridor in Ward 23 on 21 October to say an emotional goodbye to patient Andrew Watts, 40, who was discharged after spending the last 10 months – 300 days – as an inpatient at Queen Elizabeth Hospital.

He was admitted a few days after Christmas 2020 with Covid-19 pneumonia and spent eight months in the intensive care Unit (ICU) – one of the longest stays ever for any patient at QEH. Andrew was in an induced coma for five weeks, he had five episodes where he had life-threatening lung collapse and there were a couple of occasions when the doctors thought he might not make it.

The last two years have been particularly traumatic for Andrew, who was diagnosed with lymph cancer in October 2019. But chemotherapy treatment had been successful and by the autumn he was in remission and back at work as a decorator.

“A week before Christmas 2020, I started to feel ill,” says Andrew, from Dartford. “I wasn’t eating and I was losing weight, but I thought it was just the anxiety getting to me. When I was admitted to hospital with Covid I initially responded well to treatment, but then my oxygen levels started to drop and I was taken for a CT scan. That was when I was told that I had a pneuomothorax, which is a split on the lung.”

“I was on my own as this was the height of Covid, with no visitors allowed, so it was a lot to take in. By this point I was crying my eyes out, on the phone to my sister Hannah and my wife Hayley, but I didn’t want to tell my mum or my dad. I couldn’t bring myself to tell them.”

Andrew deteriorated fast and in early January was taken to ICU and put into a coma for five and a half weeks. On 21 January, medical staff called his family to say that he was gravely ill. He managed to pull through and came out of the coma, although he remained in ICU on a ventilator to help him breathe. In February the medics told his family that his lungs had deteriorated to such an extent that they might have to consider turning the machine off.

Fortunately, over the next few months, Andrew’s lungs improved and he was able to come off the ventilator in June 2021.

Andrew’s family, including his wife Hayley and sons Jack, six, and Joshua, three, were able to visit, although he could only communicate by pointing a stick at letters on a board. Being on a ventilator in ICU for so long meant that Andrew had to learn to talk and walk again. He started rehabilitation with Becky, his physiotherapist, and Farah, his speech and language therapist. It was a slow and arduous journey.

“I kept thinking ‘why me?’,” says Andrew. “It was very hard to stay positive. But I remembered how when I was going through my chemotherapy I was told to look forward, set myself little goals and when I’d achieved them set myself another one.  So that’s what I did.”

He was slowly getting better when suddenly his left lung, and a third of his right lung, collapsed again. He was again put into an induced coma.

“I came around with tubes down my throat again,” says Andrew. “I was so upset. I’d been doing so well and it seemed like it was all for nothing.”

But from then on Andrew made huge progress and, after eight months in ICU, he was eventually moved to a ward, where he spent a further two months. About two weeks before his discharge, his occupational therapist took him home for a few hours to see how he was in his own environment.

“It went really well so it gave me a big confidence boost,” says Andrew. “I was very nervous about going home having spent so long in hospital.”

Many staff – doctors, nurses, physios and speech and language therapists – got to know Andrew during his stay, and they all turned out to say goodbye on 21 October.

“The care has been fantastic,” says Andrew “but my journey is nowhere near finished yet. Going home is one major goal, but then that just starts another road in my recovery. I started walking just four weeks ago, and my next goal is to walk to my son’s school and back by Christmas.”

Dr Dan Harding, Consultant in Intensive Care Medicine, says: “We are all really proud and pleased that Andrew has finally been able to go home after 10 months in hospital. He was one of the sickest Covid patients we’ve seen, so to see him walking out of the hospital with his family was a very happy and emotional day for me and all the other staff involved in his care.” 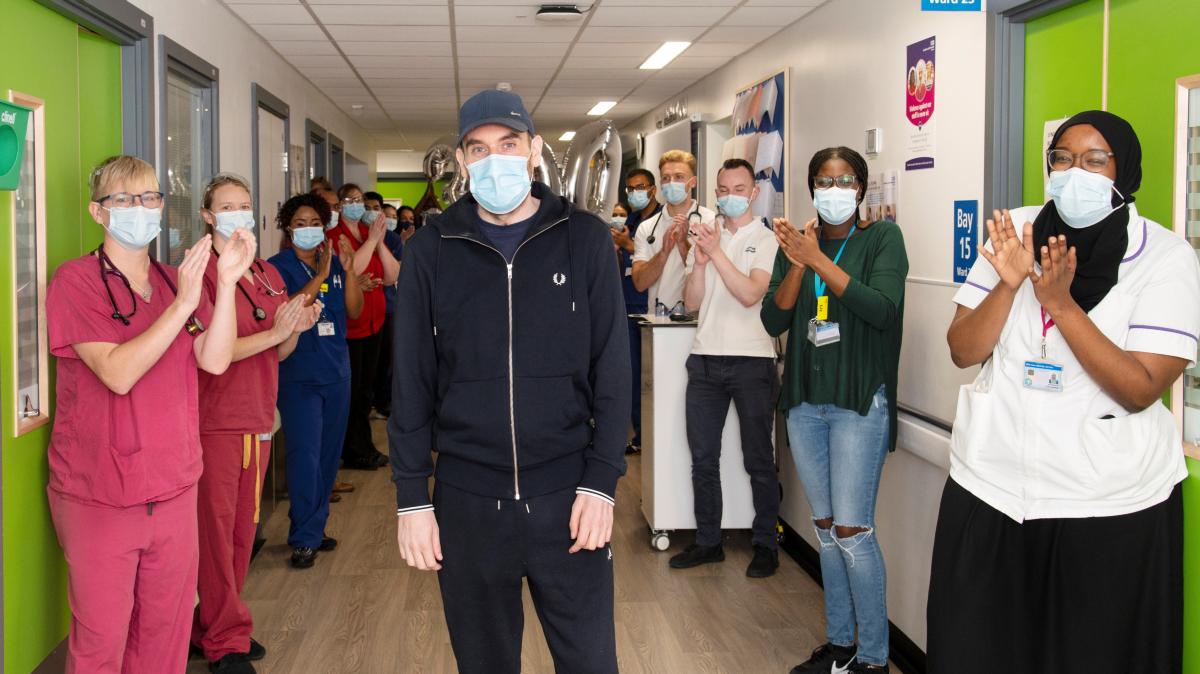